The tangos you can read here were first written to be sung, then translated into English to be spoken aloud. The idea is to turn the lyric into a sort of soliloquy so as to better understand the drama of the original. Tangos tell stories about a culture, just as plays do.

Original translation wasn’t on the radar when we started. Renée would pull a translation off the internet, we’d tweak and correct it before the milonga, recite it before the second live set, then people would dance to the song. It was entertaining and a unique format so far as I know.

One night, I heard a comment that I tended to recite the lyrics ironically. This made immediate sense. The versions we had varied in quality, and even the better ones weren’t made for reciting. I was compensating in my delivery, both for lack of rehearsal and what was missing in the words.

I read Spanish fairly well and had done some translating for the theater: supertitles for an Argentine play in New York and voiceover for a tango show in Buenos Aires. Why not take a stab at the letras?

As I got into it, I realized that lyrics mean more than what they are "about." Line length makes a difference, as do rhyme, meter, stress, assonance, and alliteration. It helps that I am also the reciter. I can test things out, see where the emphasis falls most naturally, when the speaker can make a clarifying choice.

Starting with Manzi-Gutiérrez’s Después in October 2018, we've presented all original translations. It’s not for me to say how good they are, but I know tango better for having done them. Tango reflects a great turbulent culture, and I love feeling a part of it. 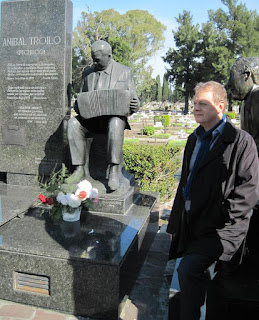 What Tango Means
brings together writer and theater professor John Osburn and Renée Rouger, event organizer/artist representative and owner of RougerTango. By translating and performing tango lyrics, they deepen the experience of Argentine tango for dancers and music fans alike.